Use this RAD checklist as an assessment tool for children at risk of attachment disorder.

If you are parenting a child who had trauma early in childhood, chances are good that he or she displays concerning behaviors. How do you know they have attachment disorder? Use this checklist to understand the driving behaviors behind attachment issues.

Remember that only a qualified mental health professional can diagnose a child with attachment disorder, which is a serious diagnosis. This RAD checklist is for information purposes only.

Be sure to download your copy of the free PDF printable RAD attachment checklist below.

Does My Child Have Attachment Disorder?

Reactive Attachment Disorder (RAD) is a serious mental health condition where children do not form healthy attachments with their primary caregivers. RAD occurs when a child experiences trauma within the first years of life.

Spectrum of Behavior with Attachment Issues

RAD behaviors occur on a continuum. Some children have attachments to their caregivers but they are insecure. They struggle with relationships but are able to make some connections.

At the other extreme, children with the worst cases of disordered attachment will grow up to be adults who are narcissistic and even dangerous because they lack of conscious.

While there is no cure for attachment disorders, the goal is to promote healthy bonding and attachment as much as possible during childhood.

Only a qualified mental health professional can diagnose a child with attachment disorder.

With our RAD rating scale below, we have categorized similar behaviors to provide insight into what may be driving these behaviors. Our hope in identifying the source of behavior is to assist you to see past the behavior and understand what is being communicated.

Behavior is communication and it is often the loudest way in which a child will communicate what they are unable or unwilling to vocalize.

Children may show behavior in one location but not another. Often kids with RAD act appropriately at school but not at home. However, after a honeymoon period (early time of good behavior), they often start to display behaviors both at home and at school.

If a child with RAD can test people in order to not get close to them, then there is no risk of being rejected. Thus, they control the situation by making sure that others will reject them instead of being hopeful of connection.

Kids with attachment issues want connection, but their disorder makes it seem impossible. Their fear of rejection is so high that they start off by trying to control the situation and force rejection.

Testing Behaviors with Home and Family

At times, kids with RAD have no clear source of anxiety but find comfort in the chaos-driven environment.

Anxious Behavior with Home and Family

Protective Behaviors are an attempt to preserve self. Meaning, it is a way to meet your own needs or attempt to keep others who may harm you at a distance.

Keeping in mind that attachment disorders are formed from a strained caregiver relationship, the child with RAD believes caregivers can not be trusted. They believe they must always meet their own needs and have learned maladaptive ways to do this.

Protective behaviors can often be the hardest to identify and interpret.

Protective Behaviors with Home and Family

Next Steps if You Are Concerned

If your child displays many of the signs above of reaction attachment disorder, get an evaluation by a qualified developmental pediatrician, therapist, or psychiatrist.

Then take steps to find therapy using one of these top 10 treatments for attachment disorder.

If your child is not safe to live in a home situation, consider these types of residential treatment or use our list of Reactive Attachment Disorder treatment programs by state.

Download this free PDF printable RAD checklist by clicking here or entering your email below.

If you have a child with RAD, what symptoms do you see? Share about it in the comments below.

Click here for a free PDF printable checklist of the 7 steps to take when your child needs residential treatment. 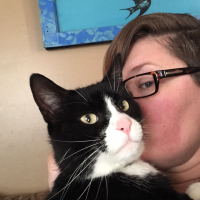 Kay Catherine is a professional Cognitive Education Facilitator and a mom. Kay is an adult adoptee and an adoptive parent. She has two adopted children with Reactive Attachment Disorder (RAD). Kay holds a graduate degree which provides her both academic perspective and lived experience.